Borderland
Posted on May 25, 2015 in Reflection 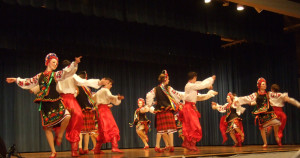 A week ago, I decided to treat myself to a bit of my heritage by attending the Spring Concert of the Cheremosh Ukrainian Dance Ensemble of Minneapolis, MN.  Entering the Ukrainian Event Center brought back faint memories of me as a child, hoping the Ukrainian event my parents insisted on bringing my brothers and me to didn’t include any speeches.  As other Ukrainian/Americans can attest to, the longest phrase in Ukrainian is, “I’d  like to say a few words…”.

I’m a U.S. citizen by birth, but I’ll always be a Ukrainian.  There’s no getting away from it. I, along with other first-generation  Ukrainian/American kids spent the weekdays immersed in our schools and neighborhoods being normal, every day Americans, but come the weekend, we went to Ukrainian school, recited Ukrainian poetry, sang traditional Ukrainian folk songs, performed original plays by a local Ukrainian writer, went to Ukrainian church, and I even had the opportunity to learn a bit of traditional Ukrainian dancing.  I was grateful for the Ukrainian community in the Twin Cities area of Minnesota as I had no other family in town, and that’s what they became to me.

In the 1980s I lived in the Washington, D.C. area.  On one occasion a group of friends and I drove up near Baltimore for an evening of fun. We drove, following the directions on a paper map and wondered if we were lost. We ended up at a remote place located on a dirt road. The building we entered was the biggest dance hall I’d ever been in.  Playing was a lively polka band, and just about any libation from western and eastern Europe was available from the bar.  As we sat down, a few tables away was a group of people singing the traditional Ukrainian song for any celebratory event – “Mnohaya Lita” – which translates as “Many Years.”  I ran over to them, began speaking in Ukrainian and everyone hugged me, asked where I was from, wanted me to join in singing –  and I felt as if I was back home.  Strangely, this kind of welcome happens everywhere around the world.  You meet another Ukrainian anywhere on this planet and you can just about guarantee that person has your back and will treat you like family.

It was many centuries ago that Ukraine was an independent country, and only in 1991 after the Soviet Union was dissolved it could officially recognize its independence. Ukraine, or Ukrayina, translates as “Borderland.”  For hundreds of years all the Ukrainians had to hold onto were their traditions – language, song, dance, religious customs.  We keep it alive because in a world where one never knows what can happen, the one thing that never dies is what you pass on from one generation to the next.  There may be small changes to keep the world moving forward, but the baseline traditions will always be there.

It was the Ukrainian music, the dancing, the reciting, the camaraderie of other Ukrainians that moved me to become a performing artist and an author.  You can do it, they’d tell me.  You were brought up with the audacity and the moxie to do anything that’s important to you.  And even though the genre of what I do in the field of the arts keeps changing and evolving, it’s the influence of the Ukrainians that pounds in my head saying, “What do you have to lose by trying something new?”  Pride, ego, time, maybe a few bucks, but that’s about it.  With my education and experience I feel impelled to engage in the arts not just professionally, but to use those skills for the growth of society. The fact that Ukrainians had been second-class citizens due to their heritage for so long drives me to make sure no one in this country is made to feel that way.  My heritage is my muse. Whatever I create to make people laugh, cry, feel solidarity or nostalgia comes from the Ukrainians in my life. They made me feel wanted, yet no better or worse than anyone else.

Ukraine, you will never be a border land to those who know and love you. 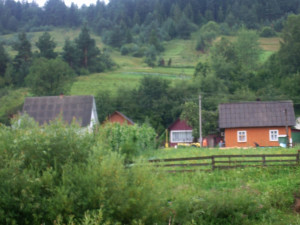