A New Year and new opportunities
Posted on January 19, 2016 in Upcoming Events

The major holidays have come and gone on this cold, wind-chilly day in January. Many make resolutions to begin a new exercise regimen. Others look at their diet and tell themselves they need to eliminate or add foods. In the throes of my creativity, I have to remind myself to eat, which helps with that whole diet thing. As for exercise, I can be found walking around my neighborhood, listening to something on my iPod that triggers my creativity, and often singing way too loud and off-key since I can’t hear myself with the earbuds blasting.

Today is actually the first day of the New Year when it comes to work, having had some fierce activity the first two weeks of the year. Now that I have the ability to focus I’m back on the computer, back to composing, back to singing, and it feels great.

To live as as successful artist, one part of me needs to be flexible, adaptable, and to think outside the norm. Another part calls for discipline and planning. Rather than get bogged down with how I’m going to fuse the two together, I begin finding ways to find make it fun. I make a “to-do” list every day, and the first thing I write on it is “make a to-do list.” Once I’ve written down all my tasks, I can cross off “make a to-do list.” Ta-da! I’m off to a good start!

In the next couple days I’ll have my “plan” for the year. Usually the Universe ends up having a different plan for me than I have for myself, thus often I find I’m involved with some project I never expected. This doesn’t mean I should give up on what I want to do; I just need to stay flexible. 2015 was a wonderful year of unplanned turns. I started writing and performing with my friend Jane Voigts to perform a successful production called “The Bible Cabaret: A Music & Comedy Revue Starring the Old & New Testaments” last January. I looked up my friend David Melbye to perform with and realized when the two of us get together with our voices, my piano, and his array of guitar/bass/other stringed-instruments, we produce magic in our music. I learned by trial and error that if I worked hard enough I could convince local and state organizations to give me grants to further my career. I also learned something bigger – that putting my vision on the line, such as telling the story of my parents and their friends of their lives during WW II and their immigration to the U.S. is both a rewarding and painful process – so much that I need to take breaks from it so I don’t overwhelm myself with disabling emotions.

So what do I know for sure is in store for me for 2016? Continue writing and producing for a concert of original jazz music on April 23 in my home town of Lindstrom, thanks to a grant given by the East Central Regional Arts Council. Book presentations of “I’m Not The Pastor’s Wife” and CD signings of my re-released album, “The Spirit’s Fire.” Two women’s retreats of music and comedy material I need to create. Perhaps building up repertoire with David Melbye for future gigs. Continue writing the script and music of my parents’ and their friends’ stories. Teaching musical theater to students at Lyric Arts in Anoka, MN. Writing anywhere from four to six grant proposals to help educate myself in dramaturgy and allow undisturbed time writing and recording music. And the rest? I’ll simply continue to keep watch on what the Universe is telling me.

What is the Universe telling you? Keep your eyes and ears open. Always. You’ll find some great discoveries.

In the meantime, Join Jane and me for another rendition of “The Bible Cabaret” on Sunday, January 31 at 7 pm at the Bryant-Lake Bowl in Minneapolis. And this year, David Melbye will be there to join us and entertain you with his acting, singing and guitar playing chops. You won’t want to miss it! 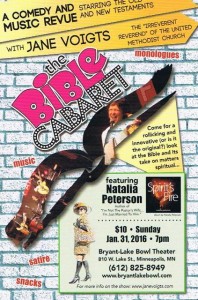