From Whence I Came Part II
Posted on December 3, 2015 in Reflection

In 1983 I was living in Washington, D.C. and came upon an exhibit somewhere on Capitol Hill. It was the 50 year commemoration of the Ukrainian Holodomor. If I’d have heard the word Holodomor used before it was probably at the Ukrainian/American Home in Minneapolis. More than likely the Holodomor was talked about at what was called an Akademia. Loosely translated, Akademia meant some kind of educational information about Ukraine. There was a lot of Ukrainian vocabulary unfamiliar to what we spoke at home at any Akademia. Consequently, I became quite the day-dreamer at these events.

So for the first time, in 1983, I learned that from 1932-1933 anywhere from 3 million to 5 million Ukrainian people died as a result of an artificial famine Stalin imposed due to the emergence of Ukrainian nationalism and protests of collectivization of farms. “Holodomor” means “death by starvation.” On Saturday November 7, 2015 in Washington, D.C., a statue of a wall was dedicated to the victims of the Ukrainian Holodomor.

In early November of this year I blogged about a new creative project I’ve been composing about my parents and their friends regarding their experiences during and after World War II. Besides my conversations with my parents, I decided to buy and read a book called “Bloodlands” by the author Timothy D. Snyder to get some historical perspective of the time they lived in Eastern Europe. Snyder’s writing of this book is so well documented, so compelling, and at the same time so tragic, my psyche was conflicted as to whether I should keep reading or stop. About two-thirds of the way through the book I could tolerate no more and put the reading away for about eight months. I finally finished reading it this fall. It’s definitely not a book for the faint of heart.

As I write this new work I keep going back to items my parents saved over the years. I’ve scanned images of their photos and documents for hours. One of the most interesting documents was my mother’s Arbeitsbuch (German work book) with the swastika plastered on every page. It didn’t go unnoticed by me that she drew over the swastikas in ink for a few pages and then stopped. Maybe she didn’t want to talk much about her life back then, but left that small piece of evidence for someone to see; to let people know how much she despised the Nazis, enough to make her want to obliterate their symbol, but stopping short of erasing all the swastikas so we would always remember her forced labor in Germany. In my father’s belongings was an official letter allowing him to immigrate to the U.S., and to his relief, not be required to be repatriated back to the Soviet Union.

When I saw the Holodomor exhibit in 1983 I couldn’t help but weep right there in public, finding out only then that besides facing the wrath of Hitler, Ukrainians were also demonized by the Soviets through genocide a decade earlier. The difference between today and that day on Capitol Hill is that I know more than I really care to know about those years in Eastern Europe. I came to learn that 10 million Ukrainians died from the time of the Holodomor in 1932 to the end of World War II in 1945, somewhere between one-fourth and one-third of the population.

For those living in the Minneapolis/St. Paul area, a Commemoration of the Holodomor will take place this Saturday, December 5 at the Minnesota History Center from 2:00 – 3:30 pm. It is open to the public, and is hosted by Maidan Minnesota and the Ukrainian Community Center. For those who can attend, you’ll hear a piece of history that will both surprise and stun you.

I was still awake at 1 am several Saturday’s ago, restless, flipping channels on the TV. I came upon a movie about Eleanor Roosevelt and her work at the United Nations on the Universal Declaration of Human Rights. Along with her work and the Truman Administration’s Displaced Person’s Act, my parents and their camp friends would no longer live their lives as refugees and were welcomed by the United States, as well as Canada, Australia, Brazil, and western European countries. They opened their arms to hundreds of thousands who had no other no other place to go than back to the U.S.S.R. I don’t know what my mother’s fate would have been, but my father, whose uncle was a Ukrainian patriot, would have more than likely been shot or sent to a work camp.

The movie I was watching last month was airing that day to honor Mrs. Roosevelt, as she died on November 7 in 1962. The irony wasn’t lost on me that the Holodomor Memorial was dedicated on that very same day 53 years later. 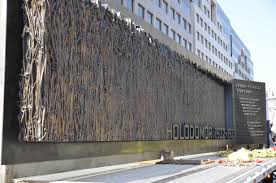 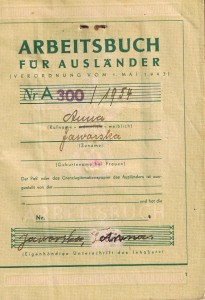