Disappointment is underrated
Posted on February 12, 2016 in Risk

From the time I was eleven I developed a knack for sight-reading music. The success of being a good sight-reader is knowing which notes you need to play and which ones you don’t. By the time I was a junior in high school my peers believed I was the best piano player in the entire school, with two thousand students to compare me to. I thought I was pretty good myself, so I entered “Contest” – a chance to perform for a judge and receive a rating. Back then, it didn’t matter what your score was. All that mattered was whether or not you “starred,” which meant your performance was exceptional.

I sifted through my piano books and chose a piece – a piano reduction of Handel’s Hallelujah Chorus. I figured if I played Handel, not to mention the great Hallelujah chorus, I would wow the judge off her seat. The problem was it wasn’t even a true work for the piano. The piece was the four voices of a choir written out for the keyboard. My turn came to play for the judge and I was improvising notes, eliminating some, adding in other places, and I may have even finished it with a glissando slide with my thumb from top to bottom of the piano. (Think tipsy pianist at a bar lounge.) I got my score sheet a half hour later. No star for me. I was dumbfounded. What the hell?! All my friends gathered around me and were genuinely sad and disbelieving. When I walked in the door to my house that day my dad saw my face and knew I hadn’t “starred.” I kept on walking to my bedroom and as quietly as possible, sobbed my eyes out. The following year, I decided to sing an actual art song for contest, made sure my music teacher approved the piece, and practiced every day after school with an accompanist for a month. I got my star.

That disappointment was hard on me, but it was really hard for my dad to see me so despondent. After that incident he would often say, “Don’t get your hopes up. I don’t want you to be disappointed.” His intention was good and he simply loved me too much to see that hopeless face I’m sure I projected when a judge gave me what I now consider a very thorough and honest evaluation. My piano playing sucked that day.

Since those two contests, I’ve learned that I can only do my very best as an artist and even then, someone isn’t going to like what I’ve created or performed. I have been rejected for a book presentation at a church because the person in charge of hiring speakers found the use of the f-bomb in my book upsetting. As an actor going on an audition, perhaps one in ten or twenty get cast in a show. Even when I’ve had the opportunity to be cast in a production, after every rehearsal the director gives notes, letting every cast member know that they are not infallible and there’s always room to grow.

A couple days ago I was on the phone with a friend I’ve known for over thirty years. About twenty-five years ago, I called him up in New York City. I asked him what was new with him and he hesitated. Turns out, it was the night before his fourth and final interview to be personal assistant to a Broadway producer. He researched the company well, he knew which shows had been nominated for Tony Awards, and which shows won the award. He probably knew more about the company than the owners did. I was so excited for him! Why was he so hesitant? You know what he said? “My mom told me not to get my hopes up. She doesn’t want me to be disappointed.” I couldn’t help but smile. I asked him what was the worst thing that could happen if he didn’t get the job. His answer – “I’d be REALLY disappointed.” “That’s right; you’d be really disappointed. And that’s it,” I replied. He got the job. And today he has his own Tony Award. His first nomination for the award for his Broadway debut as a producer didn’t get him a Tony – and he was REALLY disappointed. But the second one did. I was proud to watch him on TV, walk onto the stage at Radio City Music Hall and receive an award he worked twenty years to finally call his own.

When something doesn’t go the way I want as a creative artist I look at the picture below. It blows my mind that I’m accomplishing an enormous feat every time I sit down and play the piano, and yet there are times I walk into a room and can’t remember why I walked into it. I absolutely truly believe that every one of us does something better than anyone else in the entire world. The only way a person can find out what that one thing would be is to keep looking, keep trying, and OWN those disappointments. They hurt, but every time you work through them they hurt a little less. After a while, you’ll blow them off rather easily like I do now. Or in my case, forget what disappointed you in the first place. 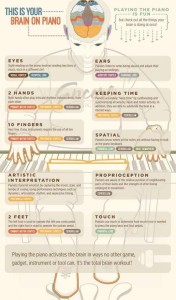